What a find!  I was walking around my local shop today and we found a box of Davidoff Zino Platinum Master Edition 2008 corona gordas laying around.  Unmarked.  No price on them.  This is like finding a diamond in a haystack when you were looking for the needle!  An amazing find.  And this isn't the 2008 Throwback edition - this is the original from 2008.  Let's get smoking....

Construction: If someone took the band off of this I would swear this cigar is a Cuban.  It has that same look.  A tad rustic.  Well put together.  A slight twist to the wrapper around the foot.  No real veins to speak of and no seams in sight.  It had been stashed away for so long the cellophane was yellowed to the point that I thought the bands were actually gold....not the pewter gray they usually are.

Pre-light Aroma and Draw: You can smell that trademark Davidoff mustiness from the wrapper and the foot of the cigar.  Some mushroom and dry hay mix with that damp cellar around the foot as well.  A cold pull is loaded with bitter earth and damp cellar.

Light and Burn: Rock solid perfect burn from start to finish!  The ash is dark gray and slightly flaky which makes some sense since this cigar is about 13+ years old.

Tasting: Right from the start I can tell this going to be an amazing cigar.  It's smooth as silk with a nice array of sweet leather, damp cellar - tons of that - pepper and earth.  The retrohate is insanely smooth with notes of walnut and banana nut bread.  Mushroom notes and that damp cellar dominate the core of the cigar, but there is a lot going on.  The overall strength is nicely mild-medium and the flavors are near perfection.

Cedar, red pepper, and some creamy bread notes start off the second third, yet the main core is still that Olor mustiness and mushroomy earth.  If someone blindfolded me and made smoke this I would guess Cuban Romeo y Julieta.  But then I'd get that damp cellar Olor note, and I'd know it was a Davidoff.  Cinnamon and sugar like a churro, vanilla cookie, more pepper.  Strength is creeping more towards medium in the middle of the cigar.  The size has to contribute to that here since we are getting more heat in that 46 ring width.  Simply hypnotic.  Every puff makes me swoon.  This is why I smoke cigars, folks.

Some cut wood and machine oil pop in around the edges with that musty flavor.  I mentioned this with the Archetype Dreamstate - it is exactly the aroma I attribute to my grandparent's basement.  This Zino has become a time machine.  I can see myself standing by the concrete double tubs while my grandpa works on his drill press in the far corner.  The floor creaks above from my grandma walking around in the kitchen making dinner.  The power this Zino was giving off at the beginning of this section of the cigar tames down to a nice mild-medium again and things smooth back out.  Notes of banana, roasted nuts, cream, and red pepper burn me into the final third.

The Zino Master Edition 2008 has been sitting around for so long that the flavors have blended into something truly amazing.  Some spiced earth, mineral water, light roast coffee, toasted wood, and more of that vanilla and banana note circle around the musty core.  The body of the cigar takes on a custardy creaminess.  There is a nice metallic saltiness that just screams Cuba in here.  Simply mind-blowing.

Value: Here's the kicker.  This cigar is only available in the second release Throwback edition, and they run you about $15 per.  You couldn't touch this original beauty on the secondary market for less than $50.  I was able to snag them at 2008 prices.  You ain't gonna find these in many local shops....if any.  If you do, they are worth every cent.

Final Thoughts: This might be the most well-rounded and perfect cigar I have ever smoked - and that is really saying something.  My first 100 rated cigar in over 22 years smoking these glorious things.  It's smooth, elegant, more Cuban than most Cuban cigars, and gives me that instant nostalgia that I can only find in Davidoff tobacco.  Would I smoke it again?  Silly question.  I would smoke these forever and ever again.  Near perfection is hard to find and this Zino beauty is as close as you can come in a cigar.  Highest possible recommendation. 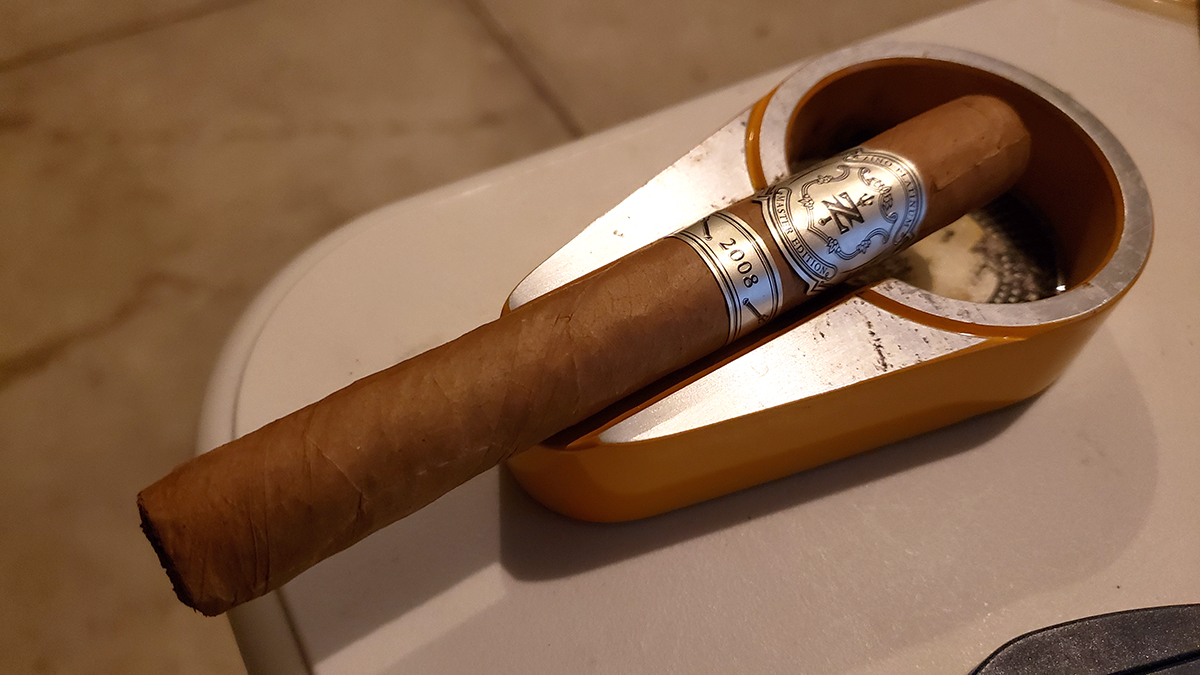 Simple and elegant.  The throwback edition sports a black 2008 band.  The original here has a silver one. 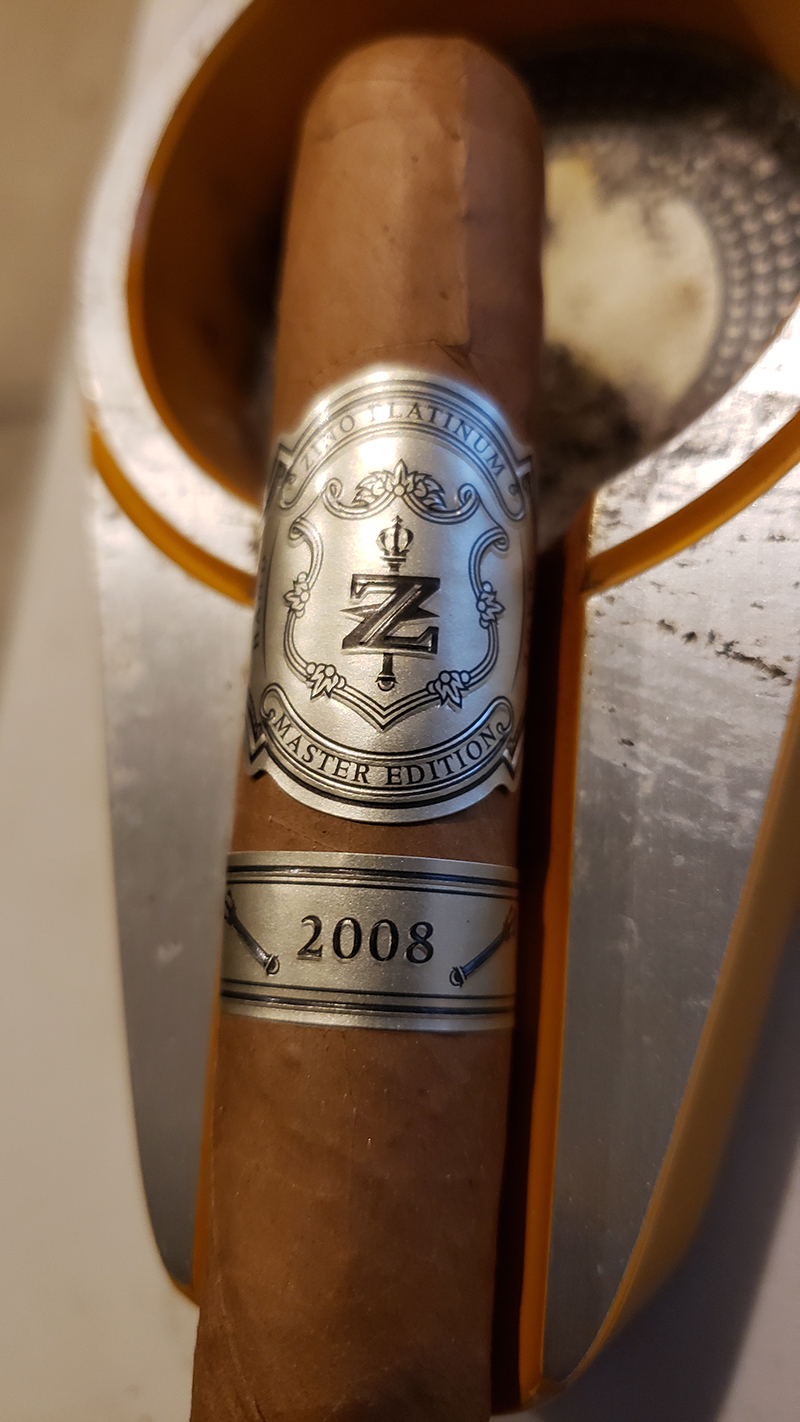 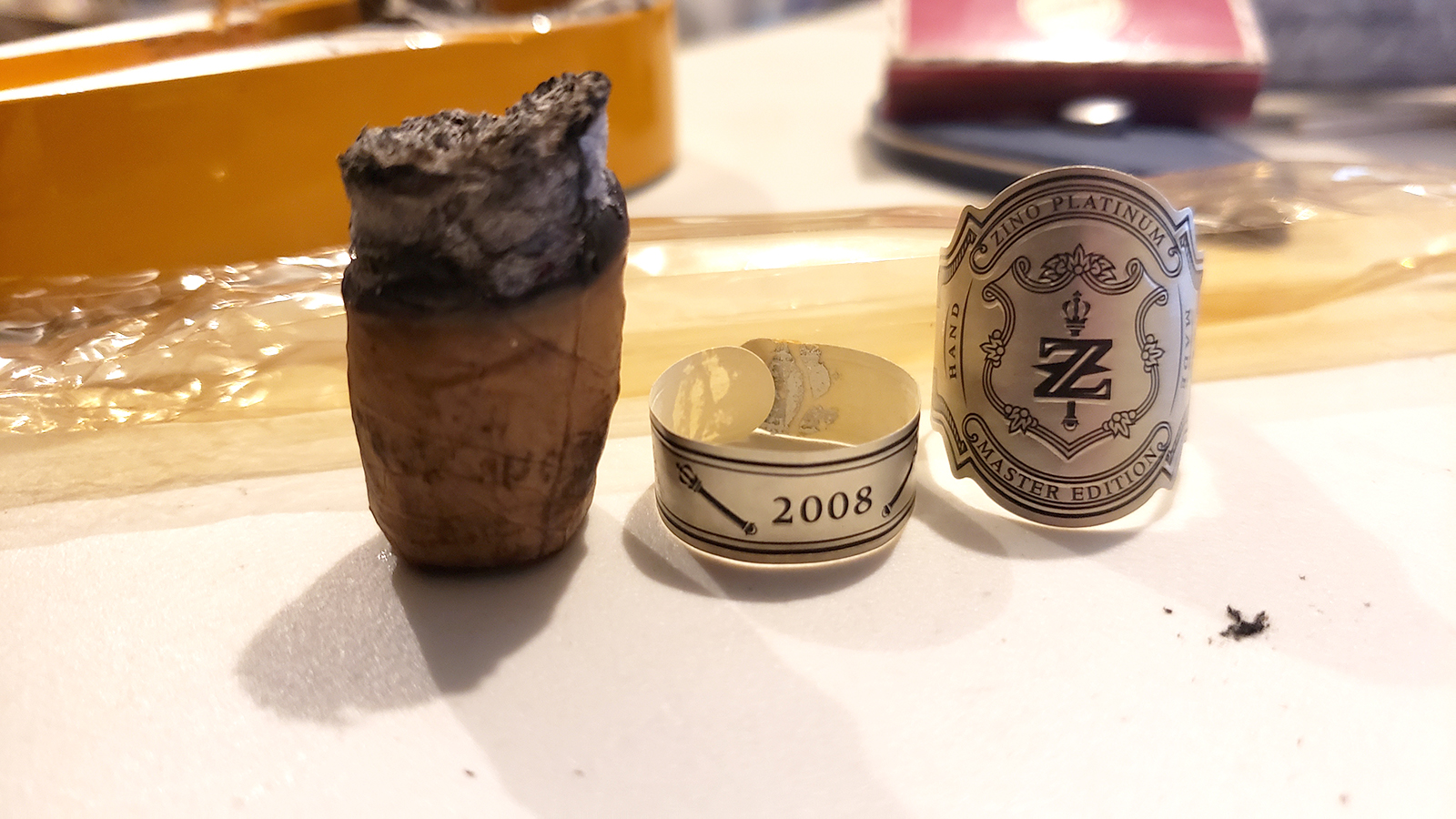 The shattered remains of my major award.  I actually held it with needle nose pliers to finish it off...