I had to swing by the old brick and mortar on Monday afternoon to pick up some paperwork.  The guys were all glad to see me and after a few jibes and jokes we started talking about new cigars.  Without hesitation they dragged me to the end of the store where the JC Newman cigars sit.  Handing me a very unusual cigar that I hadn't heard of before - the Yagua.  Needless to say, I grabbed one and did some research.  This cigar is rolled in a very old fashioned way.  Rolled by hand without molds and then pressed into a bundle of cigars and wrapped tightly into a royal palm leaf, or Yagua.  That caught my interest so let's get smoking and see what this cigar is like.

Construction: Rustic isn't a strong enough word to describe this rather pretty cigar.  I haven't seen anything as old school since the first run of the CAO Amazon Basin.  A leathery veiny lumpy wrapper leaf covers this deep brown beauty.  The shape of mine is fairly rounded but I saw others in the box that were diamond shaped or quarter pie shaped.  So much fun.

Pre-light Aroma and Draw: A massive blast of brown sugar, maple syrup, sweet tobacco, and vanilla hit me square in the nose as I pull this cigar out of the bag.  A cold pull hits me with molasses and sweet tobacco.

Light and Burn: The cigar has a wet feel and with the leathery broadleaf wrapper it took me about 5 matches to get it lit.  The burn was great until the middle but more on that below.

Tasting: Starting off, I get salty popcorn, caramel, a mild spice, and some caramelized biscuit like a Biscoff.  Easily one of the most unusual starts ever.  The flavor derived from the royal palm leaf is clearly evident in this cigar.  It feels wet heavy in the hand too.  The retrohale is sweet with a touch of unripened banana.  Absolutely astounding.  A creamy flavor that made me think of eating banana cream pie in Hawaii back in the mid 70s finishes off the first third.  What the heck is it going to taste like next?

The middle third starts with a nice mild pine and some green pepper corns.  A core is finally starting to develop now.  A heavy earthy peppery core.  I am getting more of those tropical green notes too.  More of the unripe banana, some bamboo wood...that's new...brown sugar, black pepper, raisins, all with an almost chewy density.  I did have a burn issue here.  Probably because of the way the cigars are mashed into that leaf it developed a run about a half an inch deep before I could correct it with some spit and my jet lighter.  No harm done really.

The dampness of the cigar means you need to tend to it with puffs more than usual.  Again, I find that I don't care since this is a stellar and unique cigar.  A dried apricot note starts the final third.  At this point the flavors pull back a touch and I just get broadleaf cigar.  Here we go.  It's kicking back in now.   More bamboo and maybe some tart plantain leaves,  dried apple, and some green leaf that reminds me of South American food cooked in banana leaves.  There's another odd flavor.  The smoke hit me with a fizzy mineral water texture and a note of red licorice is unmistakable.  The Yagua finishes with the same green leaf bamboo and mild pepper.  A simply astounding cigar.

Value: I paid about $8.50 for this cigar and it is worth every red cent.

Final Thoughts: In a world filled with COVID nightmares and political trash everywhere something that can distract you from the world for an hour or so with a new and unique experience is worth your time and hard earned cash.  I am going to add this to my rotation and will be eyeing a box in the near future.  Highly recommended. 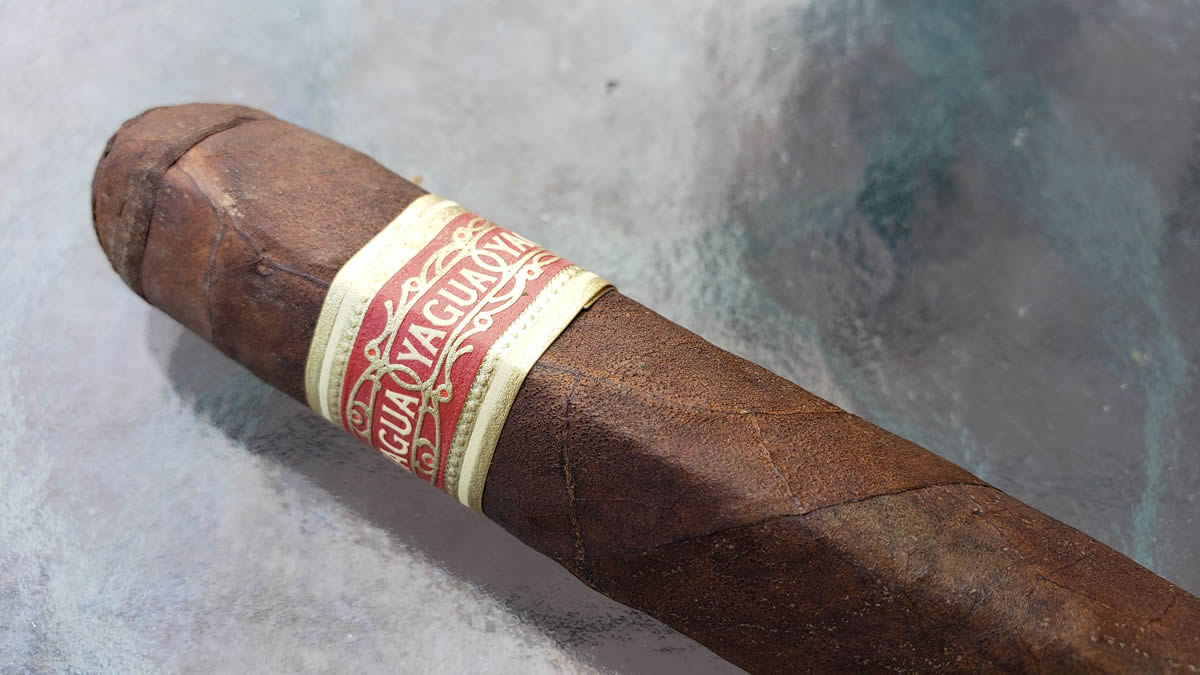 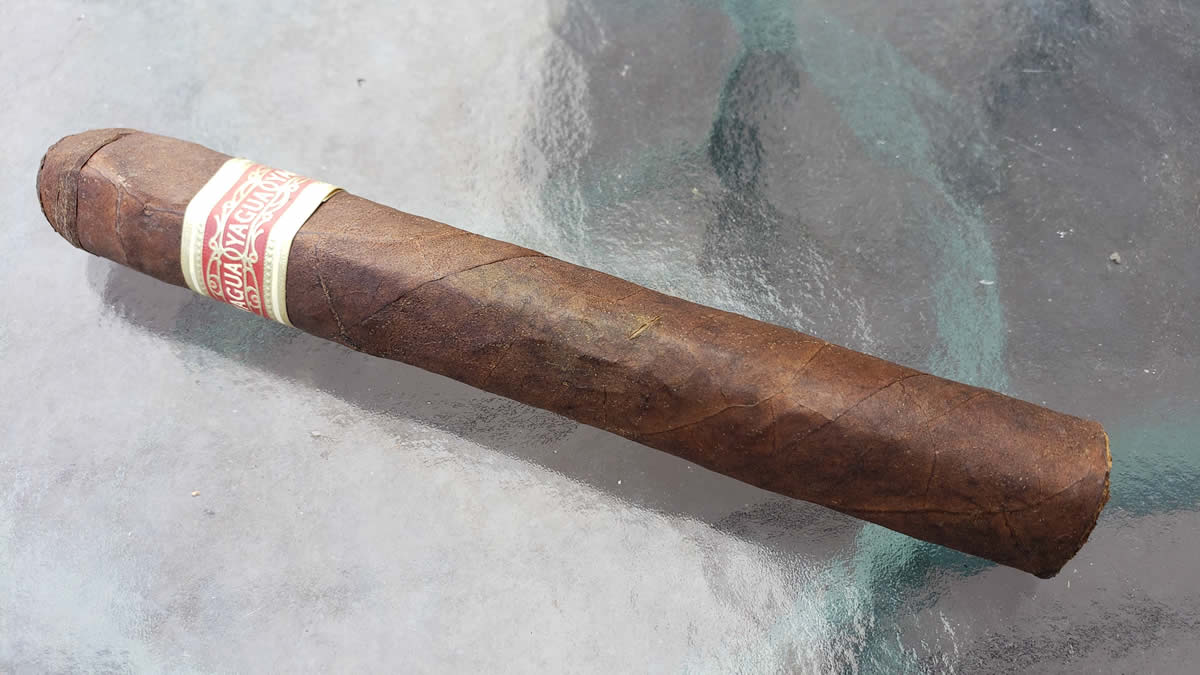 You can see the super rustic appearance here - it was more pronounced in-hand. 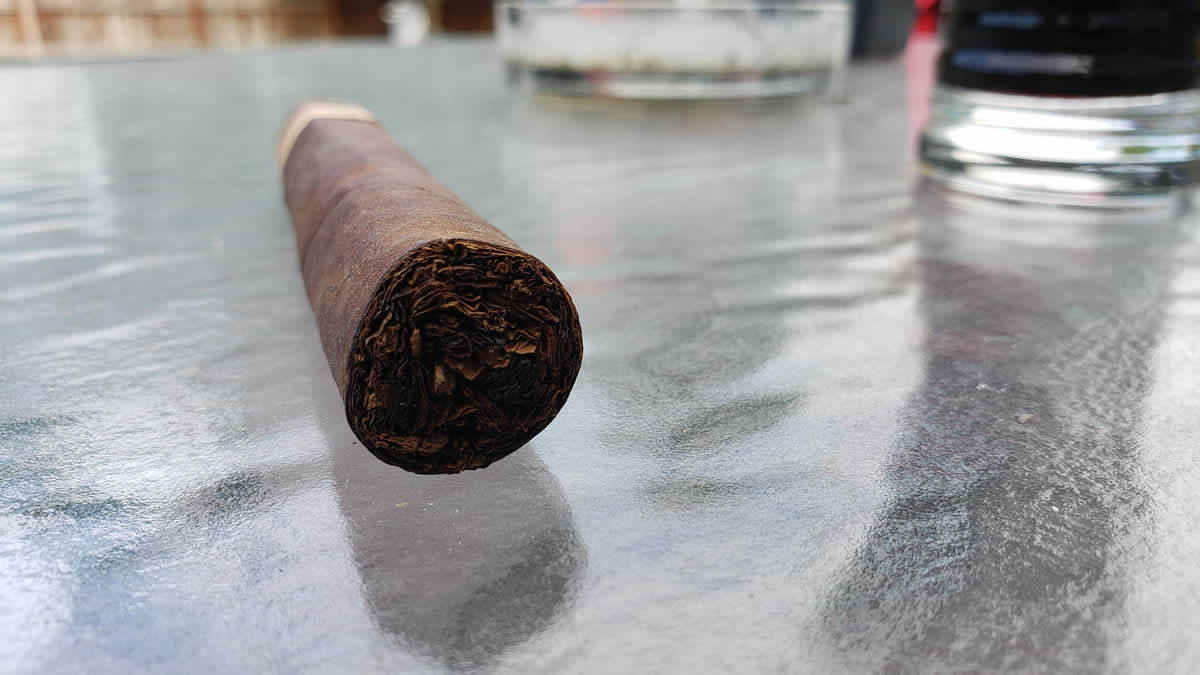 I was able to snag one of the more rounded cigars but you can still see it is slightly misshapen.