What can you say about a cigar named something insanely violent?  Honestly, I can't say enough.  The Surrogates line from Pete Johnson's new L'Atelier company is an amazing cigar.  This is the fourth one of these I have had and it really is a killer smoke - no pun intended.  Pete worked up the Surrogates line with his friends at New Havana Cigars in Columbus Ohio...which is just up the road from me.  When they first came out they were only available from New Havana's web site but now, thankfully you can pick them up from other online retailers and at local brick and mortars as well.  For tonight's review, I did something rather unprecedented for me.  I paired this cigar with some 20 year old Glenlivet scotch.  I am not much of a drinker, but the very occasional dram of scotch with a fine cigar does hit the spot. Let's see how badly the Skull Breaker busts me up, shall we?

Construction: Dark and rustic pretty much sums up the skull breaker.  Deep dark broadleaf wrapper with almost no veins and so oily you can see your reflection in it....it's actually a very attractive package.

Pre-light Aroma and Draw: I get some great earth and hay aromas from the wrapper and foot once out of the cellophane.  There are slight touches of sweet oak and leather in there as well.  The belicoso point makes cutting a snap and the draw, as you might have expected, is flawless.

Light and Burn: I had some trouble with my matches this evening - even with no breeze evident - but eventually I got things going.  The burn line is insanely crisp and almost 100% even from start to finish.  Ash is a nice deep gray with a tendency to cling and then drop in your lap while you are typing.

Tasting: Starting off you have to nod appreciatively as that Pepin/Pete peppery blast fires the skull breaker off in style.  It quickly develops into a full bodied powerhouse with flavors in the first third like earth, oak, cream, and white pepper.  It's strong but doesn't overdo it.

The second third drops to a nice medium level and adds some cocoa and leather to the mix coupled with a touch of lemon zest.  I can't believe how smooth this is.  Apparently of someone is going to break your skull it will be a smooth and creamy experience....which brings up some terrible visuals.

I am still surprised every time I smoke one of these at how smooth they are.  The final third sweetens a bit and the leather flavors increase while adding some nice black coffee to the already complex mix.  I wish this cigar had a reset button so I could smoke it all over again.  As I nub this bad boy into oblivion, I pick up some roasted meat, vanilla, and a touch of mesquite.  Exceptional.

Value: For under $8 you absolutely cannot go wrong with this cigar.

Final Thoughts: Pete and his Brother and friends really have scored hugely with L'Atelier.  Every cigar in their catalog offers the same amazing quality as Tatuaje cigars and they are almost always cheaper.  I can see the Skull Breaker becoming my regular smoke.  Pete uses such fine tobaccos that you can't help but be grateful to him for knowing his craft and giving us cigar smokers what we want.  Plus, there is something awesome and cool about smoking a cigar with a skull on the band.  As you can see from my rating, this is a contender for best I have had this year.  Most highly recommended.

As a side note, we are trying to get these at The Wharf.  Stay tuned! 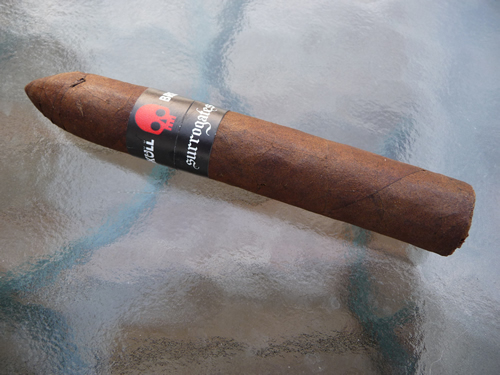 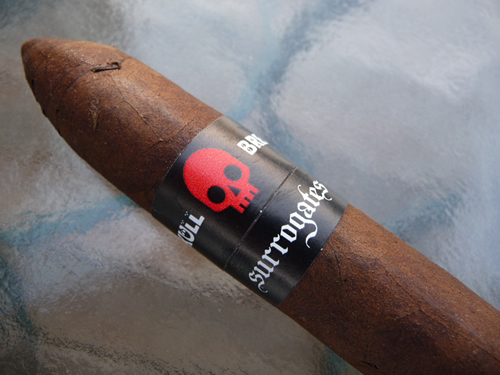 You can see one minor oops on the cap but otherwise it's gorgeous.  The band is killer as well.  There is a whimsical tone to the whole thing a well.  Very well designed. 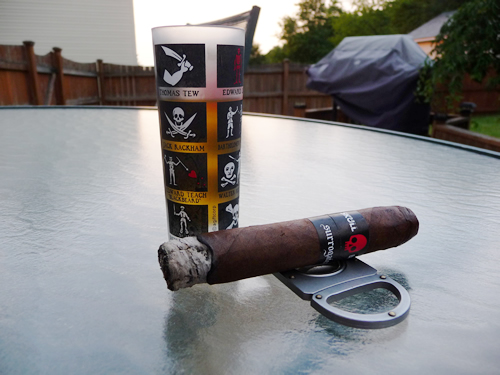 Had to break out the pirate flag shot glass for this.  What's better than a cigar with a skull on the band?  More skulls, of course!  The scotch really helped keep my palate clean so I could taste the flavor nuances.  Sadly this was the last of the 20 year old Glenlivet.  Guess I better break out out the Laphroaig quarter cask next.