So, last week I was in my second hometown of San Diego, CA.  After poking around at a few cigars shops, I found one of the holy grail cigars....Pete Johnson's Tatuaje La V&eacuterité 2013.  I know they are out there, but like the pictures of Nessie, their whereabouts always seem blurred and vague.  Imagine my shock when I realized what I was seeing as I stood in the humidor at Racine & Laramie in Old Town.  As you may know - (or do you?) - Pete Johnson is a wine lover.  His idea for the La V&eacuterité series of cigars is to produce one cigar using tobacco from one farm and one crop.  A very wine-like approach.  That being said, let's get smoking and see what the ruckus is all about....

Construction: As you might expect from reading my other Tatuaje reviews, the La V&eacuterité 2013 is perfectly put together.  No seams, no stems, no veins.  It does have a nice rustic lumpy look and feel from the binder beneath the rather supple wrapper leaf.  All in all, a real beaut....

Pre-light Aroma and Draw:  Out of the cellophane, I get leather, a sweet bread note, a touch of barnyard, and some really nice tobacco aromas.  The draw is just right.  Not wide open and not tight.  For the size, it is perfect.  A cold draw gives up some raisin and heavy tobacco and oak notes.

Light and Burn: Laser perfect as you might expect.  It fired up with one hit from two matches and stayed perfect until the end.  The smoke is insanely aromatic with notes if caramel, vanilla, and cinnamon.

Tasting: Right off the bat, La V&eacuterité 2013 kicks up loads of smoke.  Notes of vanilla, cinnamon, and - Brian Burt from Halfwheel said it first and he was right - raisin bread.    The core is a nice red and black pepper with earth and oak.  Very unique and quite delicious.  A few more puffs and I pick up some corn flakes and a very mild anise.  A truly terrific start - as if there was any doubt this cigar would be good.

Caramel, roasted nuts, and coffee notes wrap around the pepper, oak, and earth at the core.  I noticed an increase in the pepper.  A very odd note of dill....which is surprisingly tasty in a cigar...and some sweetness add to the earth to bring thoughts of a forest in Minnesota.  Anything that reminds me of my days spent with my Grandparents is an instant classic.  Thanks, Pete.  Overall, a crazy delicious cigar through two thirds.

The final third adds some dried fruit and rich caramel.  Oak and earth still add to the husky pepper core - which jumps up a tad more here too.  One thing I haven't mentioned so far is how smooth this cigar is.  It's like silk even with a rather big pepper note at the core.  The fruit and nut flavors mingle around with more of that terrific oak sweetness to create a terrific finish too.  As I burn this cigar to my fingernails, I lament its demise and wish it well in the cigar afterlife.

Final Thoughts: I kind of gave it away - this is an instant classic, folks.  This one would be a weekly smoke for me were I affluent enough to afford a 100 count box of them.  I can't praise Pete Johnson enough.  His attention to detail, expert blending, and winemaker-like approach to cigars is remarkable.  Every Tatuaje cigar I have smoked - and that is a lot - has been outstanding and La V&eacuterité 2013 is no exception.  Very highly recommended. 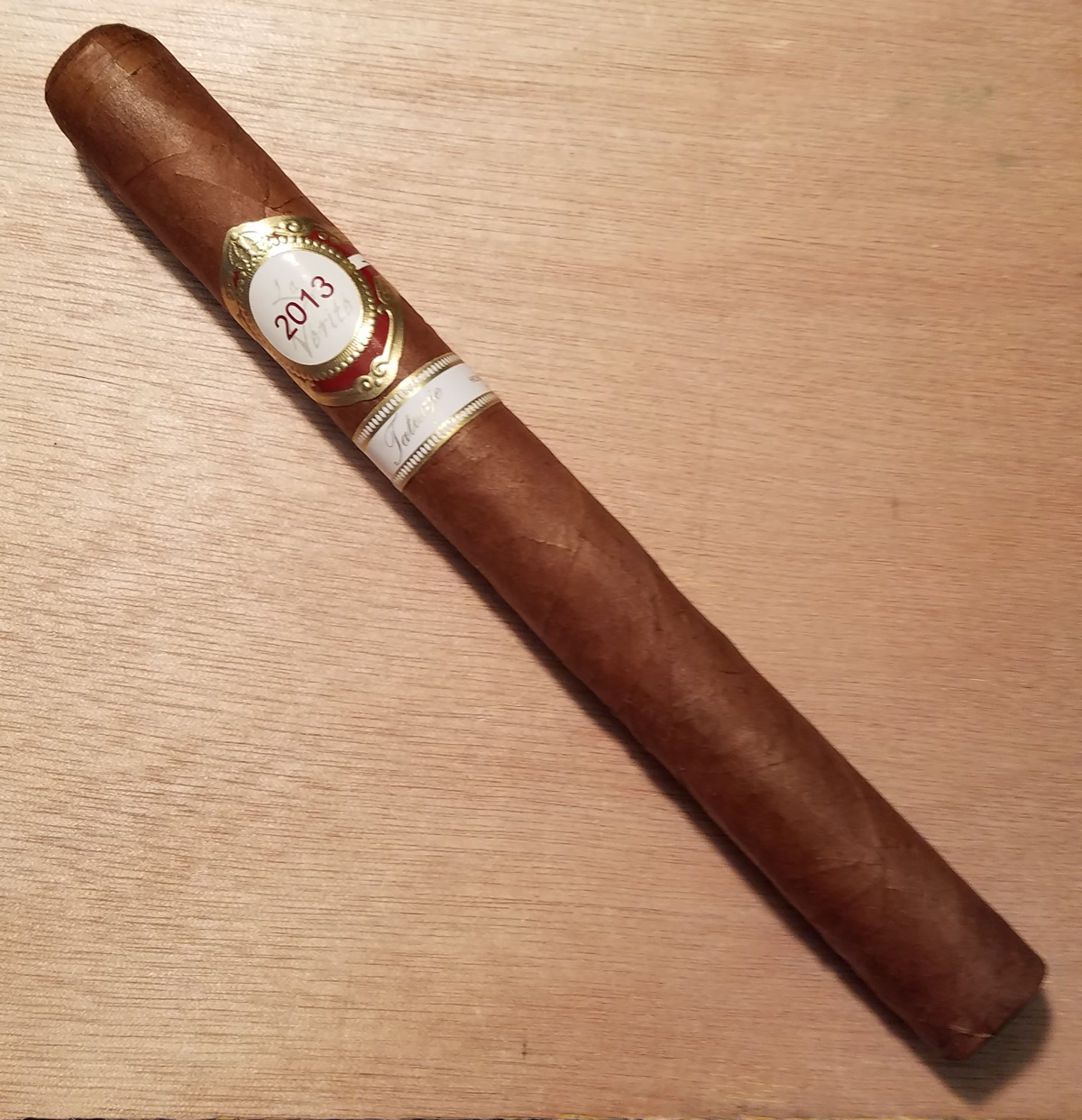 Another beautiful Pete Johnson creation (click it for big) 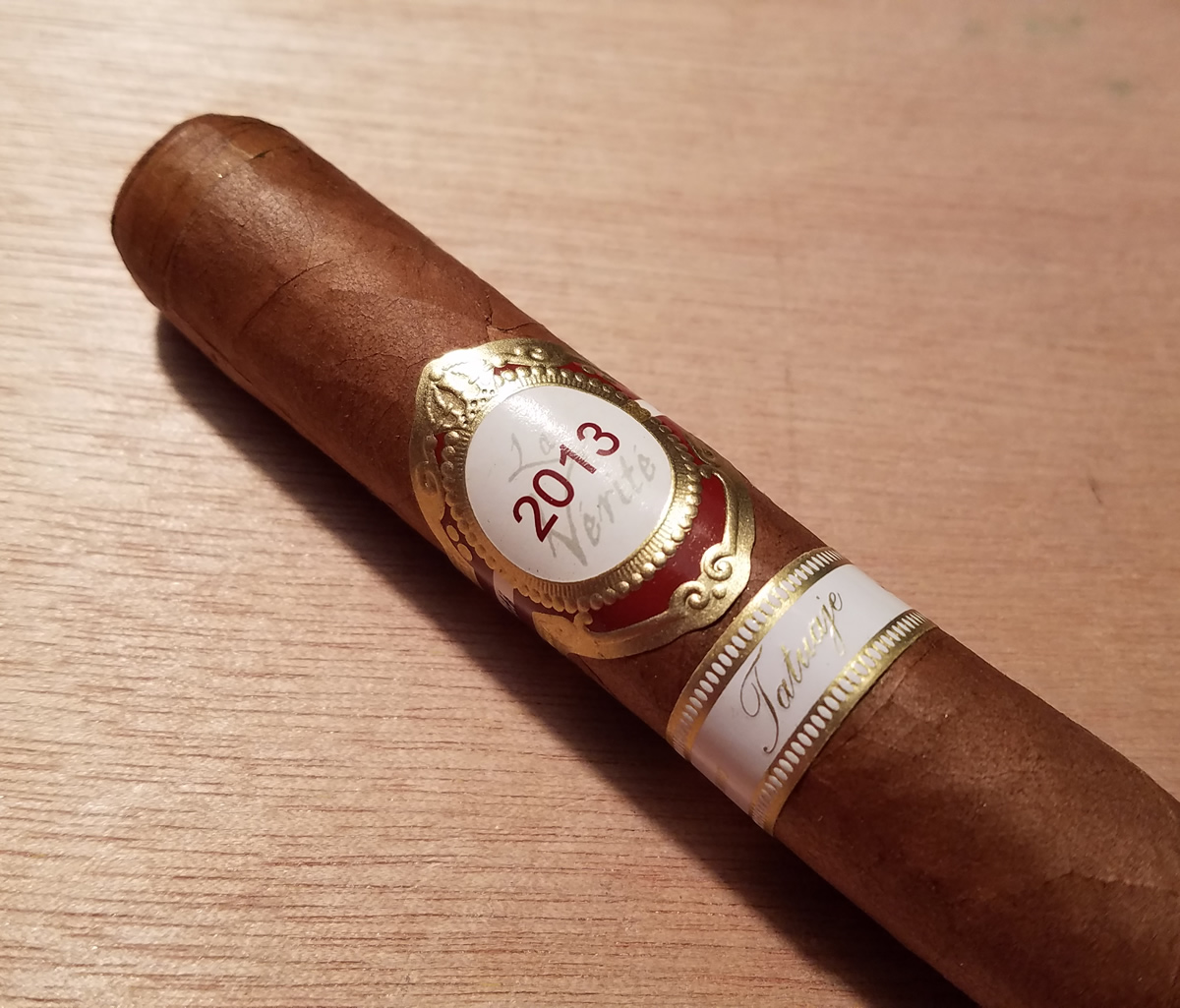 The band is simple and elegant.  You really have to look to see the name of the cigar behind the 2013.  (click it for big)