As I surf cigar retailers online, I usually see one that just makes me stare like I did at the JC Penney and Montgomery Ward Christmas catalogs when I was a kid.  Viaje captured my interest with their small batch approach to boutique cigars and when I saw the Satori, I was transfixed.  There are a few reviews out there and I browsed them a bit, but I just wanted to get my mitts on this cigar.  Well, I finally did.  I won't waste the review with a flowery worded intro....let's get right to it....

Construction: Hello gorgeous!  The Satori is an exceptionally dark and oily cigar with a slightly rustic looking leathery wrapper.  The box press shape is nicely rounded and attractive.

Pre-light Aroma and Draw: Unlit the Satori gives off a powerful cedar and sweet tobacco aroma.  No cellophane on this beauty, so I imagine it picked up the cedar from my humidor.  The draw is absolutely perfect as well.  Can't wait to light this baby up.

Light and Burn: This cigar lights easily and the burn starts off crisp and even.  The box press made it difficult to rotate when lighting - but that is really nit picky and won't bother my rating.  In the first third the burns goes a bit wonky and requires a little touching up.

Tasting: The Nirvana starts off with a nice heavy spice laced with cocoa, cedar, and espresso.  As the first third develops, I pick up a delicious bittersweet chocolate and a nice coffee undertone.  So far, I am impressed.  There is a very subtle cherry vanilla undertone to this smoke as well.  The smoke it gives off is dense and very aromatic.  Into the start of the second third there is a slight metallic sweetness that appears accompanied by a very nice salty aftertaste.  This is a masterfully blended smoke, no doubt about it.  Here comes a new flavor and it tastes like cocoa krispies....no foolin!  The smoke from the middle third gives off a very distinct aroma of vanilla cookies.  Unreal!  This cigar is terrific and it makes me want to try some of their other releases.

Value: I coughed up just over $10 for the Nirvana from Serious Cigars.  For such a great cigar I would have paid more and still been happy.

Final Thoughts: The Satori, in my opinion, really accomplishes what Viaje's President, Andre Farkas, set out to do: a cigar that is a tribute to the enlightenment one can achieve by indulging in one of life's greatest luxuries.  It''s a terrific blend and a beautifully crafted smoke.  I highly recommend seeking enlightenment by smoking a pile of these delicious cigars. 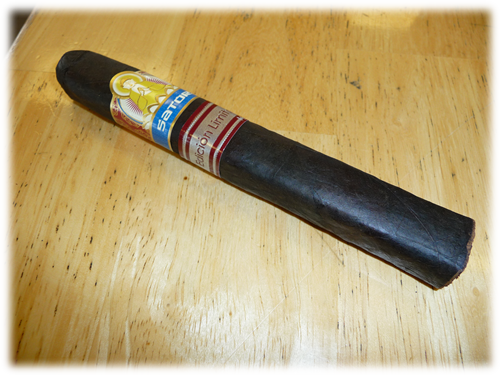 You can almost see yourself in that oily reflection 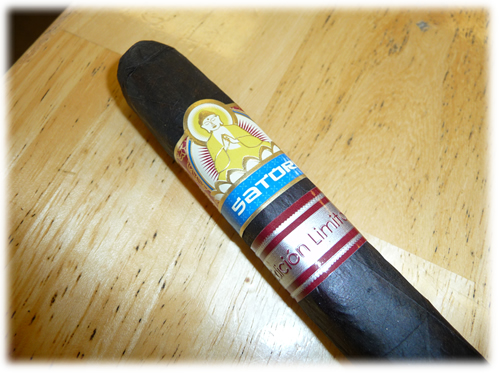