Jon Huber teams up with My Father for an annual series of limited release Cigars.  Sounds like a comic book team up of two grade A superheros, huh?  The first of these limited edition cigars is the Las Calaveras.  Based on an etching and created to honor those that have passed away, the Las Calaveras is another well inspired project from the guy that brought us the Led Zeppelin inspired Headley Grange, the Kings of Leon inspired Four Kicks, and the Jesse James inspired J.D. Howard Reserve.  Jon certainly has the touch.  I picked up a couple of these at The Market and have been drooling over them for a review....So here we go....

Construction: A very oily and solid deep brown Ecuadorian Habano Ocsuro wrapper with a few veins and perfect seams covers the Las Calaveras.  It is quite light in hand too.  The band is simply gorgeous.  A simple and classy affair that my designer's eye loves.

Pre-light Aroma and Draw: No cellophane on this beauty.  Aromas of leather, sweet tobacco, soft spices, and some cedar hit the nose.  A cold draw gives a sweet tobacco and cinnamon flavor.  And the draw, as you might have guessed, is wide open...after all it did come from the My Father factory.

Light and Burn: Three matches and a few puffs on the foot fire the Las Calaveras up nicely.  The burn is razor sharp from start to finish.

Tasting: I should warn you....these thing are powerful.  Shotgun blast powerful.  1970 Chevelle 454 SS powerful.  Starting off you should get the warning signal.  Loads of cinnamon, white pepper, orange peel, and some dense meatiness that tastes like a buffalo steak I had many years ago that I still daydream about.  The flavors aren't soft either.  Salty nuts and salty leather are at the core.  Smoke production is copious. Ash is chalk white and solid.  There is a mild bitter note that mixes well with the orange peel note. I have read it described as grapefruit, but I dunno. It's not a nicotine bomb or anything but the flavors are unbridled power that actually sting the palate a bit.  Sounds scary but it is actually quite nice.

The second third continues the powerful flavors.  More nuts and leather settle into the core of the cigar.  The cinnamon has dropped off and that meaty flavor steps up again.  Mild notes of citrus and oak leaves mingle in the background.  A dry sweetness is in there too.  I had heard this would be a powerful blend - something Pepin is really good at - and something Jon Huber appears to employ with equal measure.  The cinnamon does make a return but it is laced with a creamy sweetness that reminds me of a cinnamon danish.  Such a terrific cigar.

The final third comes all too quickly.  The wide open draw lends to a very fast smoke and it tastes so darned good that it is hard to slow down.  It does slow up a tad as you approach the end, which is good.  The only cigar I can equate that meaty profile to is the Inch by EP Carrillo...and yet it is very different.  A sweet leathery musk, salt, mineral, and more of that orange peel pop up here.  I noticed that this combination of flavors is a very warm smoke.  This would be a rocking Fall weather cigar.  Might have to hoard some for October.  I have been talking about the power of this cigar...and I should explain that it isn't a cigar to make you dizzy, it's the favors that send your palate rockin' and rollin' here.  It coats the palate and bombards the senses.  Think of a rich and decadent steak with butter slathered over it and a side of vermouth sauteed mushrooms and a baked potato with sour cream and butter.  It's kinda like that in a 5 x 50 package.  I smoked two of these delicious marvels for the review and find myself wanting more.

Value: At about $9 the Las Calaveras is a wonderful buy and worth every red cent.

Final Thoughts: What a terrific cigar from Crowned Heads and My Father.  You might think it would taste like some of Pepin's cigars but is definitely a completely different experience.  Jon Huber has really worked magic here and I hope we see more of these kinds of things with other Huber/My Father collaborations.  I never thought I would find anything in the Crowned Heads catalog I would enjoy as much as the Headley Grange, but the Las Calaveras could give it a run.  Highly recommended! 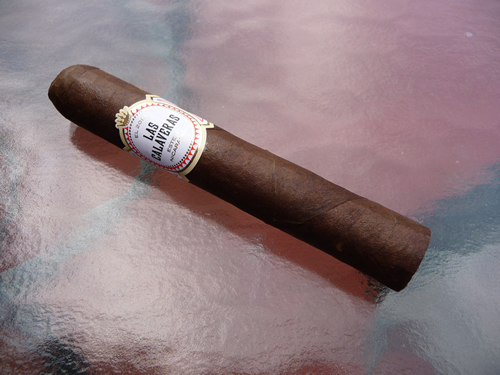 So oily you can see yourself in it.... 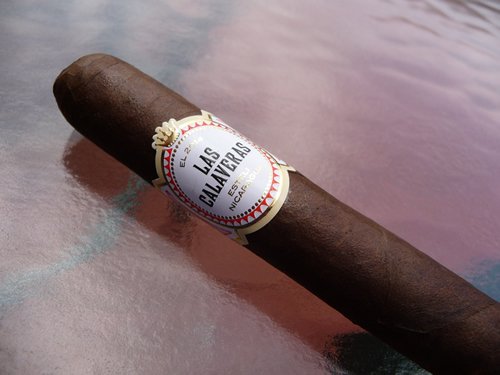 The simple and elegant band.  Love it!